We’ve made it to the sixth month of what may have been the most unusual year of our lives! Normally, time of year, I would be telling you how to get ready for camp, but a lot of summer camps have either delayed their start day or closed entirely for the year. I know many of you live in areas where there are safety concerns, and please know that you are being prayed for. So, what can we do for the month of June?

That’s right. Many libraries and bookstores are opening back up, and Amazon’s book shipping isn’t so delayed anymore. You may have a library, bookstore, restaurant, or school near you that offers a summer reading program, where you’ll get a prize for reading a certain amount of books this summer. (Don’t gloss over this if you’re an adult now- while a lot of programs are for kids and teens, some summer reading includes adults, too!)

So instead of a summer vacation, we invite you to take a “bookation” and explore new lands through the written word.

“Commit to the Lord whatever you do, and he will establish your plans.” Proverbs 16:3

Are you involved in a sport or other team? Is there one that you want to join? Imagine showing up on the first day of tryouts. You have your choice of seats, because no one else is there yet. You get a little nervous, and check the paperwork to make sure you’re in the right place. You are. Eventually, the coach shows up. No one else does. You’re the only person on your team.

What would you do? Stay? Quit? Encourage the discouraged coach?

Hannah Scott is in this situation in the movie Overcomer. Her cross country coach, John Harrison, isn’t thrilled that he had to give up basketball and instead coach his least favorite sport, which no one else seems to be interested in either. He’s more frustrated when he finds out that Hannah has asthma, which may jeopardize her ability to place in competitions.

But that’s the least of Hannah’s struggles. She’s new to this Christian school, and her home life is a stark contrast from her rich classmates. She lives with her grandmother, who’s told her that both of her drug-addicted parents died long ago.

But this one-person cross country team may be the life change that both Hannah and Coach Harrison need.

*2020 Update: You can read interviews with the cast of Kendrick Brothers movies, including actresses from Overcomer, War Room, and Courageous, in our book: Girls Who Change the World, available now!*

Kendrick Brothers Do It Again

Which of these films have you seen before?

All of these movies were made by the Kendrick Brothers, pastors who decided to expand their ministry with the silver screen. If you haven’t seen them all yet, order them online or check them out at your library this summer. That way, you can be all caught up before Ovecomer hits theaters on August 23rd.

Alex, Stephen, and Shannon Kendrick are the filmmaking Kendrick Brothers, based in Albany, Georgia. For OVERCOMER, Alex co-wrote, directed, and plays the role of Coach John Harrison. Stephen co-wrote and produced the movie. (He also has an onscreen cameo similar to War Room.) Shannon serves as the movie’s executive producer. They are excited to release their sixth movie.

The Kendrick Brothers exist to honor Jesus Christ and make His truth and love known among the nations through movies, books, curriculum, and speaking. By prayerfully blending engaging stories with doctrinal integrity, the Kendricks seek to encourage and inspire viewers and readers with resources that impact their spiritual lives and strengthen their families and personal relationships.

The Kendrick Brothers enjoy including little things to watch out for in their movies. Be on the lookout for these:

Can you find any other Easter Eggs or references to other movies as you watch Overcomer? Let us know and we’ll share your findings on our social media! 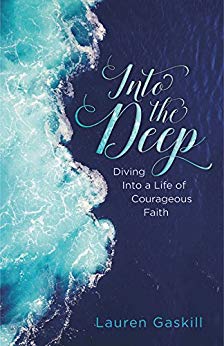 The message of Into The Deep could be summarized in this quote:

Into the Deep, written by Lauren Gaskill, is not just well written, organized, strongly themed, and easy to follow. It’s a new approach to Christian living–or if not new, better. Gaskill’s book divides between two crucial parts of the faith journey: choosing to trust in Jesus, and choosing to live for Jesus.

The part about choosing to live for Jesus really spoke to me.

Where I live, stories about “how God turned me around” and “how God changed my life” run rampant. While there is absolutely nothing wrong with a testimony of how one got saved, sometimes leaning on this perspective of Christianity limits us.

It is those parts of our journey, Lauren says, that truly deepen our faith. Deep waters require deep faith.

I can’t describe how this book strengthened and encouraged me, but I would definitely give it a 4.5 out of 5 stars and I’m looking forward to sharing it with my friends. Whether you’re in a dark time or looking to deepen your faith, this book is for you.

This book is not a checklist of “do this, do that and you’re set!” Rather, it’s something to lean on–a source of strength. A reminder that you’re not alone, and God is there, because that message is always true.

Written and reviewed by Priscilla Doran

A few weeks ago, I did a series of polls using Girlz 4 Christ’s Instagram stories. All of them were about relationships. Presumably, most of our Instagram followers would consider themselves Christians, so I asked questions surrounding that idea, from hotly-debated topics such as “Do you prefer dating or courting?”, to what I thought would be unanimous questions like “Would you ever consider dating a non-Christian?” I assumed just about everyone would vote “no” for that last question, but boy was I wrong!

Just as I was wrong about the poll results, some girls get caught up in the wrong relationship with the wrong guy. It may be because that guy’s not a Christian (which about 10% of our female Christian voters would at least entertain the idea of going out with a guy like this), or may be some other negative situation, like he’s controlling or encouraging you to get physical.

Then I got a copy of She’s Got the Wrong Guy.

As it turns out, lots of Christian women get into a relationship with the wrong guy. This book lays out the facts, gives explanations for this phenomenon, and makes suggestions for how to avoid this. You’re a smart woman. You shouldn’t have to settle for less than what God wants for you.

Girlz 4 Christ is glad to be part of this book’s blog tour. We received a copy of this book to assist in our review, but all opinions are our own.